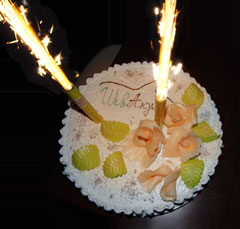 On Friday, November 19, WebAkula celebrated its second anniversary. On the eve of the company's employees, the question arose of where you can have a fun and original holiday. Everyone unanimously decided to exclude long and boring feasts, and spend time actively, in an exciting game and a pleasant atmosphere. Interesting, cheerful conversations were accompanied by a beautiful and tasty buffet, and bowling became a great recreation and entertainment for us. Despite the fact that many played for the first time, everyone showed excellent results and were satisfied:

Natalia (manager) : “Hurrah! It's done! We are 2 years old! The holiday was a success. Everyone had fun, especially during the bowling game. Most of the employees played for the first time, so the emotions were overwhelming. I think this day will be remembered by all of us for a long time.

Marina (designer) : “Many people played bowling for the first time. But that didn't stop me from having a lot of fun playing the game."

Eugene (designer) : “On Friday there was a corporate party. It was a lot of fun."

Alexander (programmer) : “Very interesting evening. It was great and fun. I like it".

Inna (typesetter) : “The company was 2 years old. It was interesting, tasty and fun.”

Ilya (programmer) : “The evening lighting is terrible. Nothing can be seen under the dim, red, nasty light.”

Olga (seo-specialist) : “A fun, pleasant evening. I had a great rest and got an unforgettable experience.”

Vadim (seo-specialist) : “The corporate event in honor of the 2nd anniversary was a success. An excellent feast, an amazing cake with the WebAkula logo, a lot of communication and just positive emotions. However, there was also bowling... Who better than an IT-person to roll balls and knock down skittles to once again put a load on their hands, which work with the keyboard all day long! In general, we had fun and now we are waiting for the New Year ... "

Anna (Director) : "We once again confirmed that WebAkula is one team that can not only work smoothly, but also have fun."