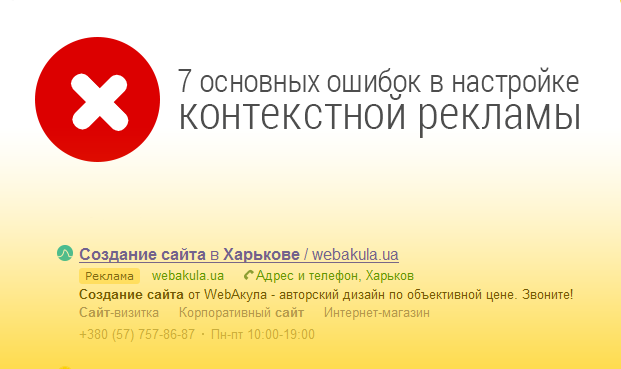 Yandex and Google assure that no special skills are needed to create an effective contextual advertising campaign. This is partly true, but how effective this idea will be depends largely on the knowledge of the features of the Yandex.Direct and Google AdWords systems. Tricks and nuances are not available to everyone and not immediately, they are learned by biting into the Talmud manual, experiments, trial and error. We will talk about the last, most common, today.

And if there is one, it can often be of poor quality and incomplete. In addition to homonyms and word forms with different meanings, it is also necessary to take into account that each business segment has its own characteristics. For example, when selling women's knitted dresses at retail, you need to add the negative keywords "evening", "wedding", "prom", "wholesale", "wholesale", "children's", etc. By eliminating irrelevant queries in this way, you can famously save on the cost of a click and subsequently increase your budget.

2. Low rates at the start of the campaign

The scourge of novice context advertisers. The desire to save money and self-doubt often push to set minimum rates. A miser pays twice - a saying that perfectly reflects the essence of contextual advertising in both Direct and AdWords. The higher the initial rates, the more chances to save in the future.

The average cost per click on an ad is determined by the CTR (Impressions to Clicks Ratio). The higher this parameter, the lower the cost per click, so it is recommended to set prices higher than those of competitors during the launch of the campaign. As a result, the ad will be shown in the top positions and more users will click on it. Higher bids at the start will ensure a high CTR. Give the system some time to "evaluate your merit" and soon there will be an opportunity to reduce the price. Everything again revolves around CTR, its high indicator for Google AdWords and Yandex.Direct about the quality of the ad and will allow you to pay less per click in the future.

For an advertising campaign in Ukraine, you must specify Ukrainian, Russian and English. Many people think that this setting is responsible for the language of ads, but in fact, these are the languages of users' browser settings.

Any mistakes in setting up advertising entail unjustified expenses. Without a competent setting of cities for displaying ads, they will be clicked on, including by a non-target audience, which would be happy to visit a sauna in Kharkov, but it is unprofitable for them to go to you from the other end of the country. Same story over time. A potential client saw the ad, went to the landing page and decided to immediately order the service. Managers, meanwhile, had already finished their work day and could not answer the call. As a result, the order is missed, and advertising money is wasted.

To further improve campaign performance, you need to track and analyze conversion rates, which can't be done without setting goals. Depending on the direction of the business, it is necessary to select the most valuable leads (conversion actions) and indicate them in the campaign. For example, going to the cart, to the checkout page, etc.

6. No changes are made to the campaign

This mistake is made very often. After painstaking work at the start, they seem to forget about advertising. In the meantime, a lot of ups and downs take place in the account: jumps in the cost of clicks, variations in impressions per day, changes in CTR values. All these important points, especially in the first week after the launch, must be responded to promptly. To achieve maximum effectiveness, the campaign must be constantly monitored, analyzing and comparing its various parameters over certain periods.

The art of writing really effective ads can be written in a separate article, as well as the mistakes made when compiling them. What "rake" is most often stepped on by inexperienced advertisers?

I would like to pay special attention to the absence of a dynamic insertion {KeyWord: Default title text}. Not everyone knows about this convenient feature, thanks to it, the user sees in the title exactly the request that he entered in the search bar.

Errors adversely affect not only the success of advertising in Yandex.Direct and Google AdWords, but also the costs associated with it. There are many ways to improve the campaign, but even by correcting the above shortcomings, you can significantly increase its effectiveness.