Why is minimalism in design at its peak? 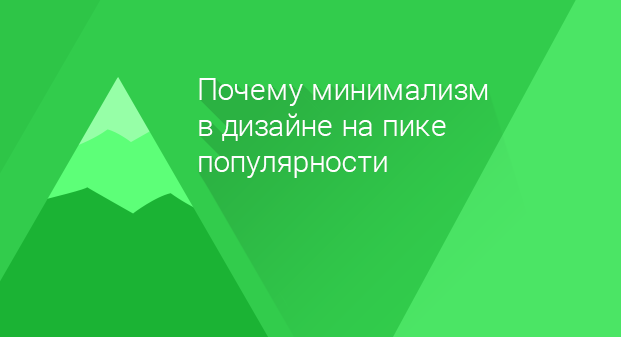 Minimalism is in high demand these days. In many ways, this is easily explained by its clear advantages: the user always clearly understands where he is and what exactly needs to be done. Thanks to minimalism, it is easy to manage the user's attention. Modern minimalism is quite a mature trend. Having originated at the beginning of the 20th century, it received its full development in the post-war period and gradually became literally mainstream.

Informational noise, typical for the modern rhythm of life, leads to the fact that minimalism with its seasoned aesthetics seems to be a real salvation. Users appreciate minimalism for its calmness and silence, designers - for ease of use and at the same time - meaningfulness.

One very important point to be made clear is that minimalism is not for everyone. This is not a universal solution for all occasions. It happens that the customer's field of activity needs a brighter and more graphically expressive design. For example, let's take projects such as Senisoft, Square Circle , Hard Rock Hotel .

In the case of the bold design of Square Circle, minimalism here will not only be out of place, but even empty; minimalism will break the juiciness of details on the Hard Rock Hotel website, but for SensiSoft illustrations, minimalism will turn out to be deadly at all.

The disadvantages of minimalism include its severity and conciseness. It may seem to some that the author does not have enough ideas or content, and someone will consider the formality of minimalism to be overly prim and therefore boring.

And yet, despite the obvious general shortcomings of minimalism, there are quite a few specific arguments in its defense, namely:

What is considered a minus, and what is a plus of minimalism, depends on the type of business to which the site is dedicated. To be sure, you can test the beta version of the site on a small sample of the target audience.

For an online store, minimalism is obviously a good solution. The site loads quickly, the navigation is clear, inclining to purchase. For statistics:

It is impossible not to note the following fact. Since Apple and other major companies have proclaimed minimalism as the accepted standard for web design, more and more sites with minimalist design have appeared on the web. It seems that designers have completely forgotten about other ways to create.

Before dressing your own site in a minimalistic design, make sure that your customers understand you correctly: