Yandex and VKontakte: is there life after the ban

Many forums joked that May 16 should be declared the day of "increasing computer literacy." It was on this day that the owners of farms in Odnoklassniki and sellers of handmade VK learned what virtual private networks are and how to bypass the blocking. Almost a whole month has passed since the imposition of sanctions, providers still blocked access at their level. But has anything really changed?

User losses for the four main blocked resources - Yandex, Mail.ru, Odnoklassniki and VKontakte - ranged from 2 to 4 million people. The number of visitors has decreased by 2-3 times: for example, if earlier about half of the uanet visitors used VK, now there are no more than 30% of them left. And three times fewer people visit Odnoklassniki!

In connection with such news, for almost three weeks, visitors to uanet actively studied news sites - daily coverage increased to 150%. Now we can say that everything is back to normal.

Who is the winner? 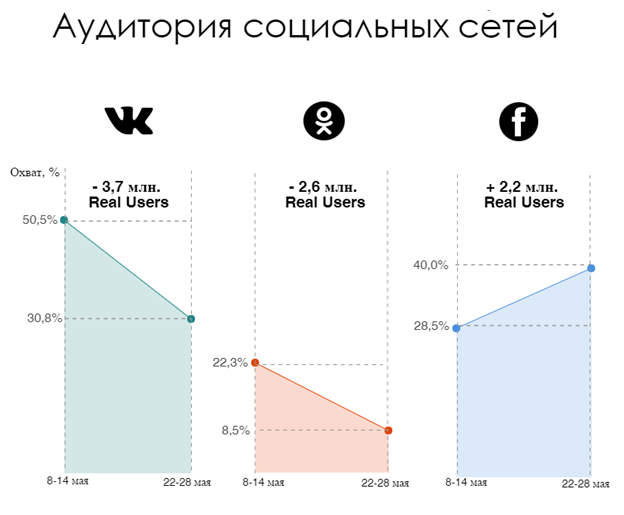 The most active trading pages and ordinary users moved to Facebook. The VK feed was full of messages - "I'm in touch on Facebook." Despite the fact that many still complain about the complex and cumbersome functionality of this network, it received a significant boost in the form of new users, because its coverage grew by almost 50% - from 5.5 to 7.8 million users per week.

The social network Google+ also received additional users: on the first day after the publication of the news, the coverage increased by 85%, and the next day the upward trend continued.

Opera also won, a browser with a built-in vpn, which is configured by pressing just a couple of buttons. Interest in this browser arose on May 16, and the activity of visitors was so high that it was impossible to connect virtual private networks for almost 2 days, they did not work due to a reboot. Opera even overnight entered the TOP-100 of the most visited resources on the Internet - for the first time in the history of creation. And this is not surprising: users under the age of 20 logged in through the Opera 4 times more often. But among those over 40, the browser has become 29 times more popular. However, there are alternatives to this browser - for example, the Tor browser, known for its complex encryption system, and therefore slow, and the new FreeU browser, now actively promoted by VK.

But this is all about ordinary users. But advertisers, apparently, took a break. The activity of Ukrainian VK sellers has fallen by almost 90%, and on Facebook ads have added only 20%. Perhaps it's all about the difference in functionality? In any case, these figures will still change.